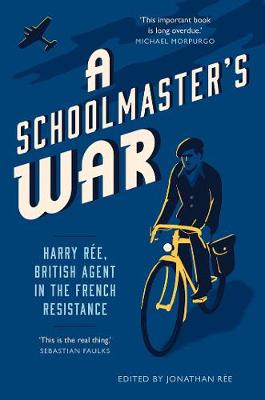 A Schoolmaster’s War by Harry Rée

Harry Rée was a pacifist and a schoolmaster for whom the Fall of France was a decisive moment in the war. He joined up, found he disliked authority and was recruited by SOE in 1942 and in 1943 was parachuted into the Jura district of France to help the Resistance movement. This book is a collection of Rée’s writings assembled by his son, the philosopher, Jonathan Rée. It covers his account of his recruitment and training by SOE and then his life behind the lines. It is not a consistent narrative. The book is made up of Rée’s diaries, stories based on his experiences written for young people, his broadcasts, lectures and letters.  As he says at the start, knowing that if he were killed or arrested, it would be his own fault “meant freedom and adult self-responsibility.” The book is a honest account of his months in enemy territory, relying continually on the friendship and support of the French who show remarkable courage in helping him. He stresses that they were “ordinary people,” men and women who were prepared to risk their lives in the fight against the enemy. (There is a fascinating glossary at the end summarising what happened to all those he mentions in his narratives, many of whom died at the hands of the Nazis.) He tours the region organising drops of  arms and explosives to blow up railway lines. He trains young members of the maquis. He organises operations against the enemy. He listens to the BBC for news his daughter’s birth. When stopped by the gendarmes, he is frightened and with cause. His papers are forged. There are successes and setbacks. There is a traitor in their midst. Rée walks into a trap but manages to escape, though shot in the shoulder and the chest. He describes vividly the death of one of his French agents. These accounts are dramatic because what happened was dramatic.

The reticence in Harry Rée’s writing that matches that in Iris Origo and gives a kind  of nobility to the narratives. There is no ego in either of these accounts. There is only the truth of “this is how it was and this is what I did.” Nothing more because we don’t need any more. The straightforward prose describes events that have their own tensions.  Harry Rée ’s description of what he did during his time in France adds up to an extraordinary account of dedication and courage by the author and those who risked their lives with him.Why add two more books to what you could argue is an already overcrowded library of war books? Because the experience of war by a rich landowner in Italy or an English schoolmaster working for the SOE in France tells about very different lives lived at the edge. What remains constant to both - and is a salutary reminder to us today - is their quiet accounts of what human  nature is capable of doing in the face of extreme circumstances.