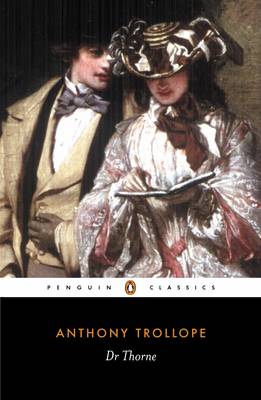 I have only started to read Trollope recently.  In May 2019, we spent a week in Sicily, not in the warmth of the early summer sun as we had expected but freezing in temperatures that the locals said apologetically they had never experienced before. We should have realised as we disembarked from the plane and saw the blanket of snow covering Vesuvius that all was not well. The week was redeemed for me by reading Trollope’s The Way We Live Now, the story of the rise and fall of the financier August Melmotte which absorbed me to such an extent that I (almost) forgot the cold.

Now, in this lockdown, I have read Trollope’s Dr Thorne and once again I have been wholly absorbed in the lives of Trollope’s characters, in particular the love affair between Mary Thorne and Frank Gresham. It is a story of class and money, how both can distort social attitudes and behaviour. Trollope mocks the snobbery of his times through the attitudes and behaviour of his characters. There is no attempt on his part to make up our minds for us about his characters people. Only by knowing them can we judge them and sometimes judgement can be difficult.

This, it seems to me, is where his genius so clearly differs from the genius of Dickens. The moment you meet a Dickens character, you know where you stand with them. You hate them or you fear or you love them. Can there be a more evil man than the lawyer Mr Tulkinhorne in Bleak House, nor a more honest and good woman than Esther, a kinder or more generous man than Mr Jarndyce, nor a more slimy individual than Skimper?

There is little moral ambiguity in Dickens. He wants us to know right from the start who is good and bad, who are heroes, who are villains. The narrative is the battle between these two forces with the outcome that good usually overcomes bad. This ‘simplicity’ of approach is the product of Dickens’s anger at the injustices he sees around him which he must do what he can to reform.  Trollope doesn’t deal in caricature.  His heroes and villains are in many ways more complex than Dickens’s characters because they are people we might meet in our daily lives (and probably do)  He intends us to see the virtues and vices in his characters. He wants us, his readers, to make up our own minds about them. The judgement must be ours. This doesn’t mean that he is more forgiving than Dickens. He allows his readers a freedom that often Dickens doesn’t. He prefers to show his comment on our natures through mockery, showing how wrong it is to judge the world on the basis of class or money.

In Dr Thorne, we always know that Mary will marry Frank even though she is a pauper and Frank “must marry for money” to save the estate. Yet Frank never deviates from his love for Mary and is prepared to risk all for her.  The irony is that in the end her goodness isn’t enough for the conventions of the time. Ironically, she must  inherit a fortune in order to sae the day. Her unexpected inheritance is both a wonderfully satisfying ending and (in the cold light of day) improbable. We don’t care, of course, because Mary and Frank are made for each other and we want those wedding bells to ring, as of course they do.

What a wonderful, unforgettable novel, in many ways as true today as it was when it was written more than 150 years ago.